I WILL write of moonlight and roses

Poet in prayer glances out bedroom window.
Wonder catches in her throat.
Beyond a tall pine silhouetted against
navy blue sky and black mirror named Lake Huron,
she beholds full lunar splendor, reflection an undisturbed
line on the water, pointing to shore and to her.

She’s only seven. No one has told her about clichés.
But knowing from her own eyes that
Beauty is Truth,
she hand prints her joy on school paper—
the kind with heavy lines for capitals
and light ones for lower-case:

If you cannot see the moon
Shining on the sea
Then you surely cannot see
The moon that shines on me.

“Lights out, my love,” says Mom. “Get plenty of rest.
In the morning you’ll help me plant roses.” 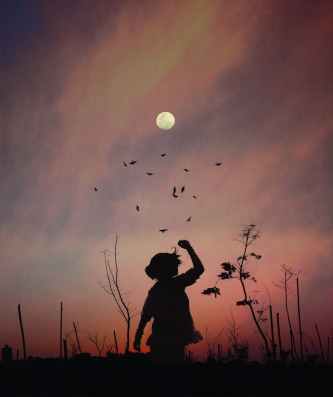 Today’s challenge:
Write a paragraph that briefly recounts a story, describes the scene outside your window, or even gives directions from your house to the grocery store. Now try erasing words from this paragraph to create a poem or, alternatively, use the words of your paragraph to build a new poem.

My source paragraph:
On a field trip to Paris, about two hours northeast by train, I experienced my first Gothic cathedral in Notre Dame de Paris. My initial impressions made me catch my breath. Soaring lace-like stone walls, sparkling jewels of windows, high arches supported by flying buttresses beamed the message of God as openness and light. In contrast to the Romanesque structures I had seen in the south, this example of a primarily urban architecture changed in overall effect from each visual perspective. Instead of the monastic idea of a fortress for protected contemplation, this was all spiritual uplift and light, soaring versus a firm anchoring to the earth. 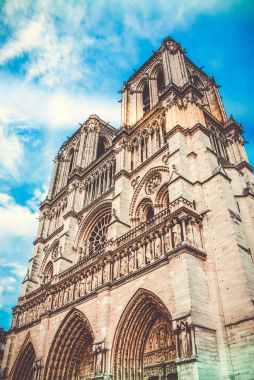 English Class and Beyond

Women drift by, invisible under water.
Some float on the surface, seeming distant
from view, dissolving,
death closer than they think,
wondering how Sylvia did it.
Students fidget with phones
no longer concealed in pockets.

Can one rise from the dead?
Outlines on the shroud of Turin
seem to enforce the belief, but miss the point.
Who needs saving anyway? Truth
from the mouths of babes doesn’t help.
Naming all the fish in the sea won’t bring them back.
Some, undaunted by dead weight,
flout convention, no hesitation

while even dogs are trained to hold their tongues
without command to speak.
Doberman Pinschers once only
for policing, learn to sniff out death
sometimes with astonishing effect
working for minimal tasty rewards
persevering for payment of soft words.

Eternal absence stretches over
the pre-winter sky, shadowing
chemical death and chemical resurrection
Unfazed by law and medicine, two men
fear little in their house with their cats
and detritus. Sudden awakening!
Not dead yet, much closer to here than you think.
Not hearing the elegiac boasting
or trying to understand the voice.

Undreaming
the role of law is now to nourish
try to turn rampage to stillness.
Better living through chemistry.
Two men had too much, buckeyes
unconscious among green hills
knowing nothing
of cannibal tendencies in Plath.
Young people want to know why.

The prompt today is a fun one, which I applied to the poem linked above. The result is an interesting draft, I think.
First, find a poem in a book or magazine (ideally one you are not familiar with). Use a piece of paper to cover over everything but the last line. Now write a line of your own that completes the thought of that single line you can see, or otherwise responds to it. Now move your piece of paper up to uncover the second-to-last line of your source poem, and write the second line of your new poem to complete/respond to this second-to-last line. Keep going, uncovering and writing, until you get to the first line of your source poem, which you will complete/respond to as the last line of your new poem. It might not be a finished draft, but hopefully it at least contains the seeds of one. 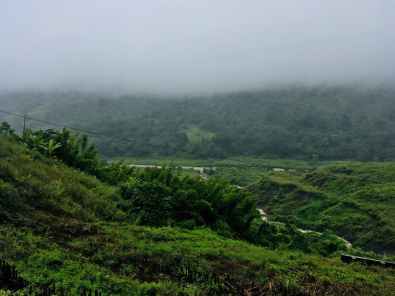 All the world’s a…

Break a leg, they say before
you make your entrance.
The French, more earthy, say Merde.
Maybe that’s shorthand for break a leg—
what you say after it’s broken and they
carry you off the stage in mid scene.

Weeks of rehearsal for your high school role in
Guys and Dolls, a Hot Box girl. Not a speaking
part but at least you get to sing and dance.
Better than when you had a nonspeaking role
in Into the Woods. Mom said you had the
title role—you were a tree but your dramatic
ambition reached higher than standing there,
holding a sigh that said tree.

So they said break a leg as you pranced
onto stage, well tuned and synchronized.
Before the first take back your mink,
a high right kick sends a sharp pain
into your left ankle, and you fall at the feet
of Adelaide. Alert cast members
whisk you off as the show goes on. You
continue the lyrics through your exit and pain.

Break a leg, they said before
you made your entrance.
The French, more earthy, say Merde.
Maybe that’s shorthand for sprain an ankle—
what you say after it’s sprained and they
carry you off the stage in mid scene.

It’s only a game
it’s all a game
take me out to the ballgame
to see a game of skill.

If you’re game for anything
put on your game face
on game day, even if it means
playing a waiting game.

Know your endgame
if you’re thinking of
gaming the system, for
a tie game is like kissing your sister.

A gamer knows
the name of the game,
whether big game hunting
for wild game or Game of Thrones.

She’s got game and knows that
many a tear has to fall but it’s all
in the game, besides, there’s no
crying in baseball. 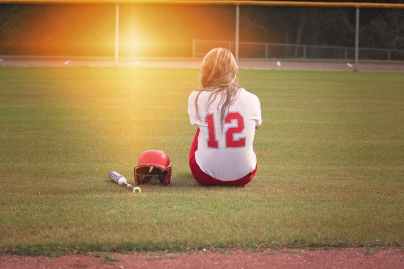 Meadow in trembling sunlight
nosegays of violet and clover
bouqueting the green.
On delicate hooves
billygoats dance across
to picnic on new grass.
WHO’S THAT ON MY BRIDGE?
I’LL EAT YOU FOR LUNCH!
roars the troll.
Goats speed up tempo
to reach the fairer side.

Troll guards his border to keep all the green.
Some goats crossed as kids,
knowing no other meadow.
Troll, uncaring, fumes and taunts
PEOPLE ARE SAYING
THEY RAPE AND THEY PLUNDER
SEND THEM BACK SEND THEM BACK
OR I’LL EAT THEM, he thunders.

Then from afar he hears sobs.
A voice vaguely familiar—ah, his son!
No one will play with me.
People are saying my dad is
orange, shouts at billygoats,
and keeps all the green for himself.
I’m a weirdo, they say,
and they chase me away.

Troll’s moan is gargantuan; tears
flush the copious warts on his nose.
He crawls back under his bridge.
Dreaming of a wall, he exults in
his greatness, consoling himself
with a meal of fresh billygoat.

Prompt: A villain has a moment of humanity, then returns to villainous nature. 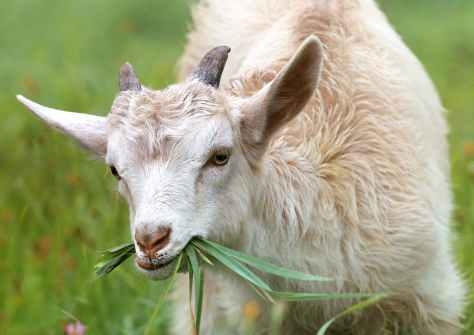 A single one.
They are useful in twos.
Something you think is missing
really isn’t, but it stops you
from dancing.

Often the beginning of a dream
that causes anxiety
in the dreamer.

Backstage, she awaits
her solo but finds
only one slipper. In vain, she
implores, but no one
will help. Besides, she can’t

remember her role, or what
the dance is and no one
will help. She could improvise
but no dance is done
on a single point.

She awakes.
–only a dream!
Returns to joyous
renewal of sleep.

Meaning of a ballet slipper
in dream?
Dance on. 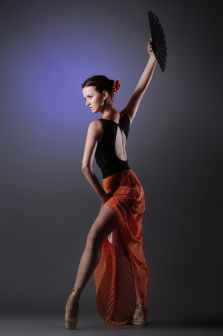 Where to look at a gift horse,
if not in the mouth, where?
Rude to count its teeth, so maybe
in the belly, quatre fers en l’air?
From its back? Don’t jump it
over the birthday cake
or tie it to the Christmas tree
or put a wedding ring through

its nose to keep it from invading
your laptop.
If not in the mouth, where?
The other end? From which end
did the horse excrete the Greeks
into Troy? Don’t ask!

[PROMPT: Today, we challenge you to write a poem in which the words or meaning of a familiar phrase get up-ended. For example, if you chose the phrase “A stitch in time saves nine,” you might reverse that into something like: “a broken thread; I’m late, so many lost.” Or “It’s raining cats and dogs” might prompt the phrase “Snakes and lizards evaporate into the sky.” Those are both rather haunting, strange images, and exploring them could provide you with an equally haunting, strange poem (or a funny one!)] 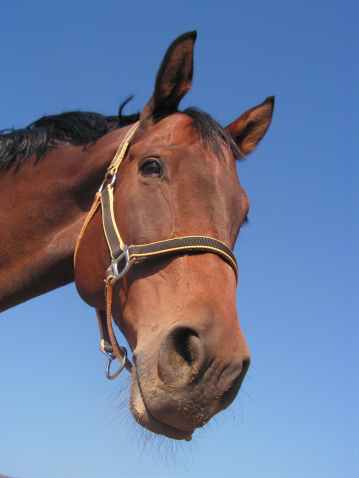 April in the ATL

City in a forest, here more like forest than city. Some trees still display their naked trunks against the sky. Others, more modest, begin to don frilly scanties of new leaves, still golden or new green. Some azaleas still flame their magenta, while other blossoms, browned out, prepare already for next year’s show. Pansies still rival the sunlight, not yet suffocated by the heat of the day. Long shadows on the sequined darkness of the water. Distant rush of traffic and above the trees, a tiara of tall buildings.

My future, much shorter than my past,
is now. If the union is my body,
the state of the union is good
in the future that is now,
though less scenic than in the past.
Systems are outdated,
more prone to breakdown, even with
constant maintenance.

But still there is a future future,
with or without me.
CRISPR perhaps,
and artificial intelligence
to compensate for the loss
of the innate kind, plus
artificial aesthetics to renew the
natural landscape. 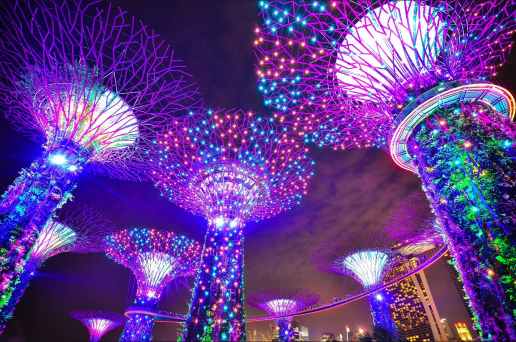