Prompt: Begin with a photograph. Now find a poem in a language you don’t know (here’s a good place to look!) Ignore any accompanying English translation (maybe cover it up, or cut-and-paste the original into a new document). Now start translating the poem into English, with the idea that the poem is actually “about” your photograph. Use the look and feel of the words in the original to guide you along as you write, while trying to describe your photograph. It will be a bit of a balancing act, but hopefully it will lead to new and beautiful (and possibly very weird) places. 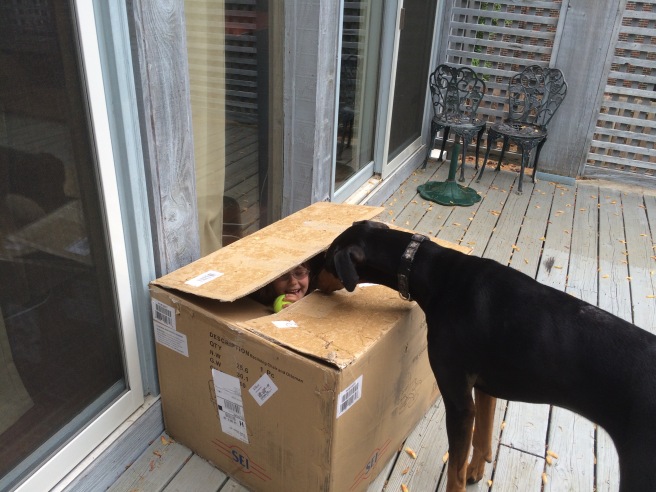 My fake translation:
SMALL PLAYFUL ONE

Small one small one you are where?
Inside, inside the box.
Silly, silly tell me where?

Small one small one you are where?
Inside I am inside .
You are silly.
Silly, silly where?

Small one, small one you are where?
In the silly box.
Silly why silly?
Why are you in there?

Small one I have found you.
I have always been here.
Silly place for you.
I like it in here.

Small one play with me.
Yes let’s play fetch.

Process note:
As one with professional experience in translation, I found this prompt so much fun! The photo is one I took from my family album, of my actual dog Melvin in search of an actual loved one. The challenge was to find a poem in another language. I wanted one that uses Roman alphabet so I could get a feel for the sound, but since I have a familiarity with several European languages, I can almost always pick out a few words, which would spoil the fun. I looked at several poets who wrote in less commonly spoken languages, but couldn’t find their work in the original. Finally I found one by Yalvaç Ural. He writes children’s poems, so it seemed to fit:

Now a real translation, by one who speaks Turkish:
UNGRATEFUL CAT

The cats were worried
The dogs did not care
People were dogs
And dogs had no identity.

The cat was ungrateful
It left, just like that.

(No translation credit given. Ahem, it figures. Thankless task.)
I had no idea it was about cats and dogs, honest!